By Zach Cooley
Pics thanks to Bob Hamilton 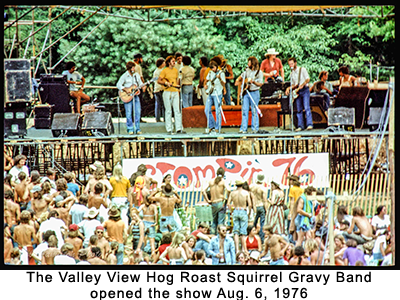 Forty-two years ago today in Southwest Virginia, one of the most historic music festivals in our nation was wrapping up a three-day run that offered 150,000 bluegrass fans the experience of a lifetime. Stompin 76 was the brainchild of the then twenty-one-year-old promoter Hal Davidson from Baltimore County, Maryland.


As a result of extensive promotion encompassing at least twenty states throughout the eastern United States, Stompin 76 became the major festival in the bicentennial year of the southeastern portion of the country, a celebration astronomically overcrowding Carroll County with a 1976 population of approximately 25,000. Most of the audience did not pay the small $12 admission charge for the three days of music. "CES Security redefined their role once they saw the scope of the event and basically surrendered the gate," Davidson recalled. "That’s why I liaised with the Pagans."

The picturesque spot for this historic event was a rented farm, then owned by Boyd Lawson, just eight miles north of Galax, Virginia. Performers were transported to the stage via helicopter while audience members parked their cars as far as 11 miles away from on Interstate 77. Some even floated in by raft on the New River.


Headlined by then emerging musical artist, but now legendary Bonnie Raitt, some regarded this festival as the greatest experience of their lives and of the American Bicentennial. Some of the locals, however, saw it as one of the biggest fiascos to ever hit our area. Along with the accolades, Davidson has been defamed for decades due to bringing the Woodstock of Bluegrass to this once sleepy county, which was the real reason the event never returned, unlike modern festivals which become annuities for their communities.


"I wasn’t the first Marylander to visit with the intention of doing big things here," Davidson added. "Carroll County was officially named for Charles Carroll, a signer of the Declaration of Independence, from Maryland. But not since its establishment in 1842 had such excitement been witnessed. Though raw and invasive, I am proud of the achievement at such a young age of a great talent lineup and a greater audience all in a natural amphitheater!"


Today, the vibrant 63-year-old still promotes and consults on festivals, but remains a recluse living in the Washington DC metropolis. Despite ill feelings that still exist today toward him by some, he remains the friendly promoter and welcomes contact with just about anyone. He’s written some of the best books available on the subject of concert and festival promotion and production.

This week, he announced the possibility of another Stompin, this time in mid-Tennessee, far from the retribution of the Roanoke Times and others not wanting the event to ever return here, though many young people such as yours truly are excited by the memories told in stories from their elders, which have been enhanced by some after 42 years.


Regardless of individual feelings on the historic festival, it helped ferment Galax as the capital of old-time music, exponentially multiplying the crowds to its annual Fiddler's Convention afterward. The now-famous Floydfest was also inspired by Stompin 76. It has hosted such popular acts as Blues Traveler in the past.


Despite the backlash that still continues from Stompin 76, there has been an invigorated interest in this momentous event via the Facebook group called "I was there for Stompin 76." As of today, the group boasts 843 members who share their experiences from long ago. I am a member, not because I was there or even born yet, but I wrote an article that commemorated the 30th anniversary of Stompin 76 twelve years ago that is still regarded by many as my best work as a columnist. Earlier this year, Stompin 76 was inducted into the International Bluegrass Hall of Fame in Owensboro, Kentucky, which adds to it continued legacy.

Having the opportunity to interview Hal Davidson about a time when Bonnie Raitt played a concert in the neighboring county of my hometown is still one of the biggest honors of my career. Hal remains a friend to this day, and that in itself is a tremendous blessing to me. A few years ago, my wife Emily and I decided to visit the site where Stompin 76 took place. We couldn't get up to where the actual stage would have been because it is now privately owned property, but we went as far as our car would take us, blasting our stereo with a Bonnie Raitt collection album equipped with many of the early to mid 70s songs she would have performed at that show.


The mountains and view of the river were undoubtedly lovely, but being so overgrown, it was hard to envision where people might have been sitting to watch the redheaded legend. I would assume the area, which has long since been regarded as Pot Rock, got its name due to the activities that took place on these hills even before the days of Stompin 76.

"Stompin shirts are showing up at bluegrass festivals all over America bringing together a crowd who just keeps stompin," says Davidson. "There’s a real undying spirit associated with attending this special event. This one event captured the mood of the time and this feeling is still held in the hearts of everyone who made the sojourn to celebrate together. The resurgence generated by our new interaction on the internet quiet for decades has now stirred latent memories, releasing fresh stories and thoughts of joy. The spirit of Stompin keeps us forever young."