Welcome to the Official web site of Stompin 76, the legendary Bluegrass Music Festival held in the summer of the bicentennial year, North of the Bluegrass Capitol, Galax, VA, USA.

This one-time event was the biggest bluegrass music festival on record. The star-studded bluegrass/ blues lineup, combined with a city's worth of bluegrass music and festival lovers, a low ticket price and historic marketing campaign, made Stompin 76 the place to be August 6,7,8 1976. The promoter was 20 yr. old Hal Davidson from Baltimore Co, Maryland. The year before at 19, he founded Cactus Productions, Inc. in Las Vegas. Many attendees and their decedents still talk about wild experiences forging close relationships lasting a lifetime. Bluegrass did it!

The huge promotion brought festival goers together from all over the eastern, US. People from everywhere, that magical artist mix and that natural setting made this bluegrass festival unlike any other bluegrass festival before or after. Share the memory.

APPEARING ON ONE STAGE:

A short rain came about supper time cooling things down, giving everybody a chance to eat. Not sure how we fit all 11 bands listed in one day? Saturday’s lineup alone would’ve made a great festival! Of course, looking back, any one of these days would make a great event!

Exact duplicate of the Original
3 Stickers $10.00 FREE SHIPPING
(give one to a friend) 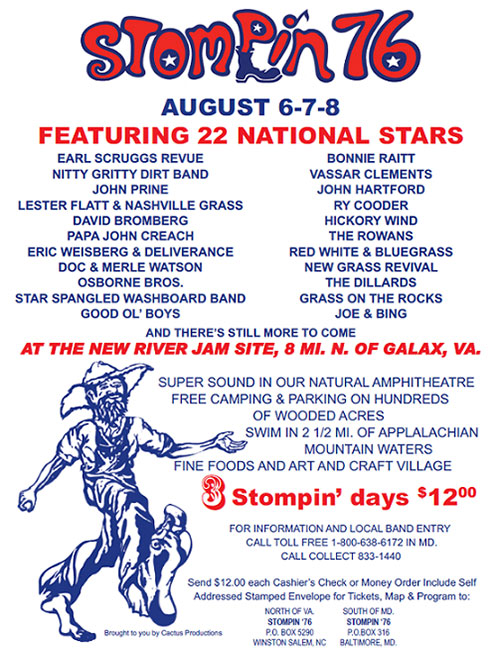 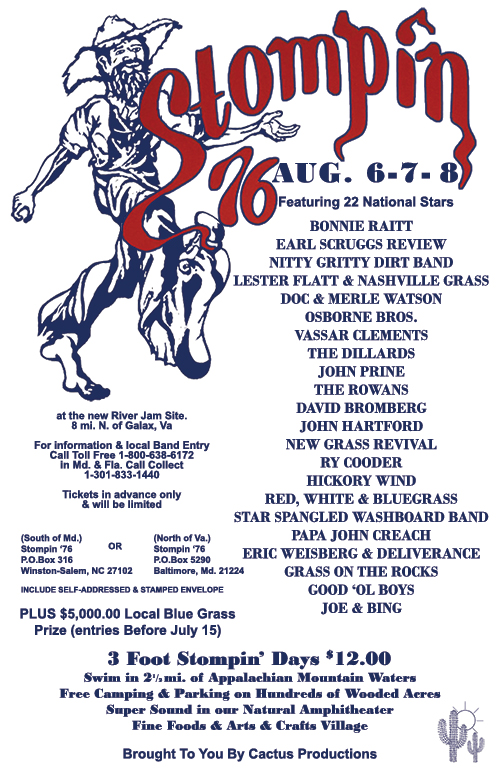 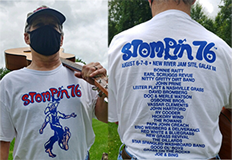 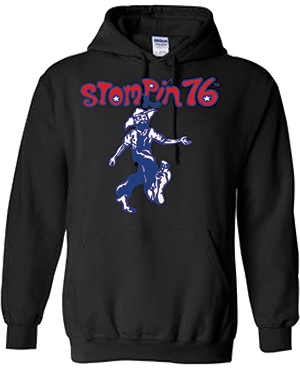 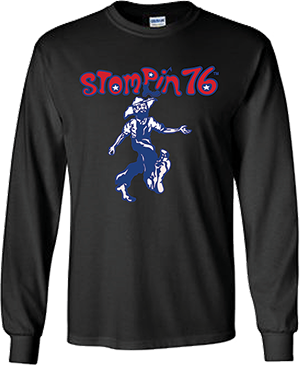 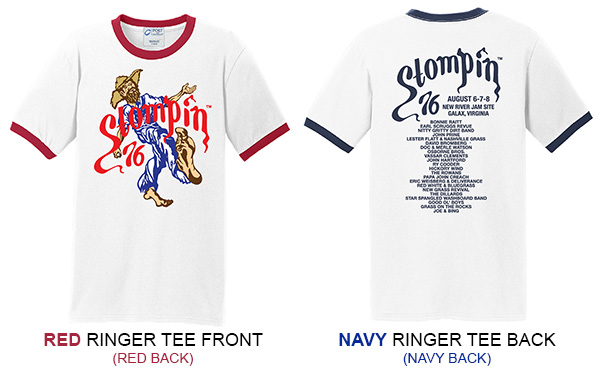 In 1976, we used two different logos,
this ringer has not been seen since then.

ALL PRINTING IS PROFESSIONALLY SILKSCREENED

Thanks to the IBMA for inducting STOMPIN 76 into the BLUEGRASS MUSIC HALL OF FAME, Owensboro, KY

"The Woodstock of Bluegrass"

Hal founded Cactus Productions the year before with the intention of promoting concerts back in Baltimore, where he was from with his many contacts. The 2 eastern Stompin offices were located in Owings Mills, Maryland and in in Winston Salem, NC. Ticket buyers responding to exciting, widespread radio ads mailed cash into these locations where their ticket orders were filled and mailed back. This method and ticket outlets in 6 states is how the 29,000 advance tickets were sold. An estimated 2,000 more were sold at the gate.

"In fear of not promoting enough, we over promoted and made history" My apologies to that rural county and those nice country people. At least the Galax Fiddler's Convention got a big boost from it forever." ... Hal, 2011 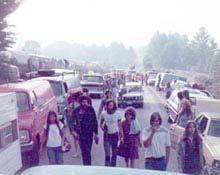 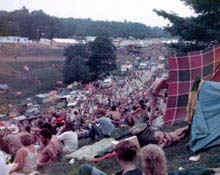 A bunch of us drove down from NJ, in a questionable vehicle, and camped in one of the cornfields. As I recall, the Pagans were there as "unofficial" police, and I remember catching rides to the stage area from time to time. One of my enduring memories is of Johnny Hartford, who showed me this origami style bird made from leaves of some sort (possibly corn husks) that someone gave to him. It has endured in the annals of my memory as one of the best adventures I've had.
Cheers Nancy MacIntyre Hollinshead

$12 for a three day festival; no wonder I could afford it then. Unbelievable and I was there.
David Valentine

I remember parking on the side of the road and hiking in for 5 miles just to get to the gate to get in. So many people and the music was great. I lived in Carroll County, VA and I had never seen that many people in one place. First time I got to see Bonnie Raitt. It was great! We helped so many folks to get to and from the festival and saw some that had been driving in circles for hours trying to find the way back to the main roads. One of my most memorable times ever.
Selena King

The festival that stands out above the rest was Stompin 76. Wow! I traveled there with 3 friends from NJ in a VW van, of course. We got there late at night. I remember seeing all the Pagans when we pulled into the grounds. We got stuck on the road close to the river and that is where we wound up camping. Not only was the music line up fantastic but since my boyfriend was a musician, I listened to many great jam sessions.
Donna Segalla Steele

We got there Thursday night about midnight and set up - wasn't a level spot anywhere, so I set my tent up so I would roll down against the side and not slide out the door. Each morning the PA would fire up with "Let Your Love Flow" by the Bellamy Bros. (anyone else remember that?). The creek that fed into the river was the place to be - everyone each morning. White Lightning was $4 a cup (dispensed via 16 oz Dairy Queen cups as I remember it) what a heavy head after THAT. Yep, that was SOME time.
Clark Robbins 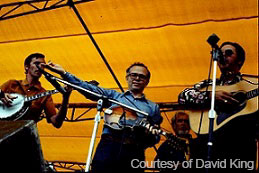 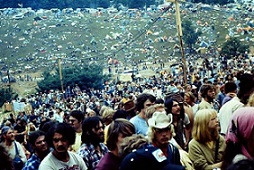 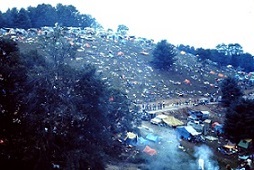 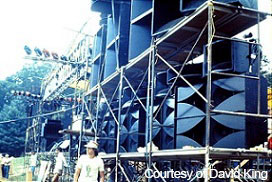 Early Stompin 76 flyer (est. March 1976) shows Kingfish with Bob Weir, who ended up not being available, this was before we booked Bonnie Raitt, John Prine, The Rowans, & David Bromberg. 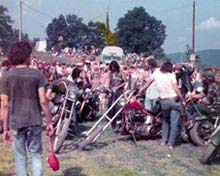 I'm glad I have the opportunity, 44 years later, to thank you for putting together Stompin 76. Although the craziness and party atmosphere certainly have their places in my memories, above all else was the great music. My friends and I saw nearly every minute of every act, leaving the stage area just long enough to scarf down some food and fill up the coolers. We were amazed that you were able to get all the musicians in and out of there.
Thank you! Brian Yoklavich

I was there.One of the best times of my life.My only regret is that I didn't get to see every performer there.Wasn't sufficiently medicated,I guess.Thanks for the memories.Hope to get the "t-shirt".All the best!
Dan Poteat

What an epic weekend this must have been. I was too young to go with my Dad, but he gave me some pictures. He snapped this one I wanted to share with you.
Keith Umberger

My, oh my. Talked to an old friend today---and he had brought up our trek to Galax way back when. What memories came in to view when I saw this website. I was 15 when I went to Woodstock with my uncle------and 22 when I went to Stompin 76. I'm 56 now, and out of the mix-Stompin was the one that I most remember. We took off from Pennsylvania and Maryland and headed down 81. In the process of getting as close as possible, and trying to park----the 2 carloads got separated. I remember, we had to walk a couple miles to get anywhere near the music. And, as for the Pagans---I remember they were pretty much traffic overseers.And the music---no words---utopia.Thanks for the memories. Good stuff.
Later Van

Watched a documentary about Woodstock the other day and got me to thinking about Stompin 76. Left Maryland on Thursday, Aug 4, 1976 with 3 other guys in a 70 Chevy Impala. We took 20 cases of beer, some food and quite a few illegal smiles. We got caught in the big traffic jam like everyone else so we decided to split up. Many hours later we drove as far as we were allowed and pulled into a field and set up camp. Instantly met many new friends we never knew we had. Had the best time I ever had at any festival. Never saw a fight or any trouble. Did eventually run into our other two friends. This was probably the best 4 days of my party life. Wish I remembered more of it!
Terry

Man, what memories. I was there all three, maybe four days. Grew up in southwest VA and went to many music festivals in the 70s, including Union Grove many times. Stompin 76 was by far the best. That festival was unbelievable. I spent most of my time watching the music and wondering around from camp to camp meeting new folks. The music was fantastic and the setting priceless. Thank you so much for putting that event together and I am sorry it was so hard on you Hal. With greatness comes a price.
Doug 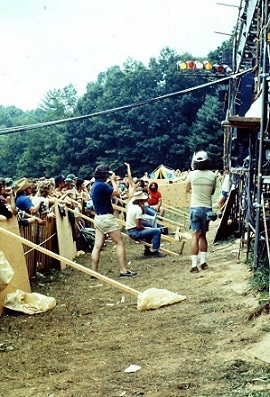 Thanks to the throngs of wild, adventurous people who make the trek to Stompin 76, all of you who are still alive, and those of you who contacted me over the past years since the internet emerged. Thanks for all of the contributions to the Facebook page as well. It's good we've finally rejoined virtually!

It's great to hear your stories after all of these years. Now with facebook's new group: "I was there at Stompin 76" the legend continues and is growing. The web has provided us with a virtual gathering farm once more. Those raw days back then, we were all so young, so carefree. Stompin was the biggest party that year and in retrospect one of the biggest outdoor camping festivals in modern American music history. You were all parking and camping all over that poor county (Carroll). The State Police Commandant flew in on his helicopter just to let me know that my customers were parking on his interstate 11 miles away and walking in. He wanted to know what I was going to do about it. I didn't have a good answer so he left.

This is to commemorate that classic bluegrass festival, the people that ventured there, and to stir the spirit once more so that those vivid (or blurred) memories of Stompin 76 linger for many, many years to come!

For 3 days in August 1976, 8 mi. north of Galax, Va., on Lawson's Farm, we called the New River Jam Site, just a stone's throw from the North Carolina border, bluegrass and blues abounded. Outdoor Music festival lovers from all parts gathered for that historic event. Stompin 76 was the bluegrass festival that made bluegrass cool and exposed it to an entire eastern nation's youth that year.

The T-shirts list everyone one of these bands on the back. Wear it to your favorite music festival and we'll guarantee you'll make new friends.Stompers are everywhere!

Boyd Lawson's 425 acre farm was the historic site for the event. Thanks to his hospitality and the kindness of his wife, their land will live in infamy. Located off Route 58 about 8 miles North of Galax.

"Music washes away from the soul the dust of everyday life."
~Berthold Auerbach 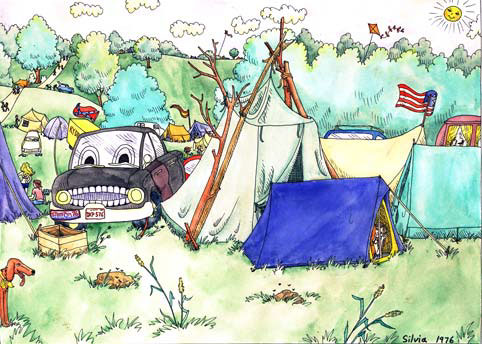 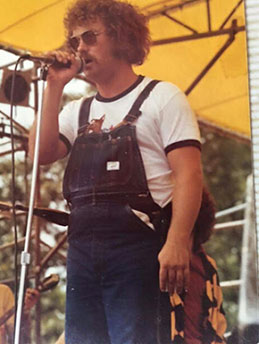 "Long long ago, my husband (who was then my boyfriend) and myself, and his brother and bro's girl went to a music festival in the mountains of Virginia. We had forgotten to bring the tent poles, so I went to the woods nearby to get branches, to which we tied the tent. Having no camera with me, I just had to draw a pic of the place. That's me in the little tent. Everyone was camped in this big cow pasture, and there was a great festival atmosphere going on." 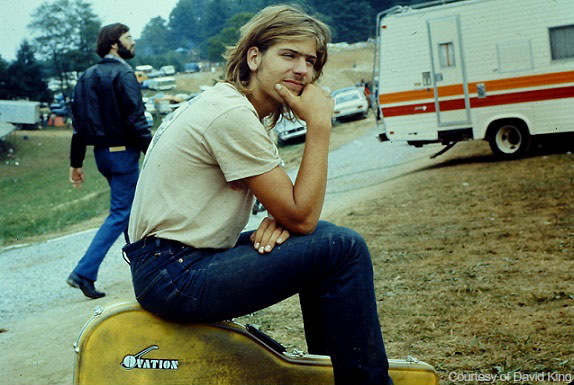 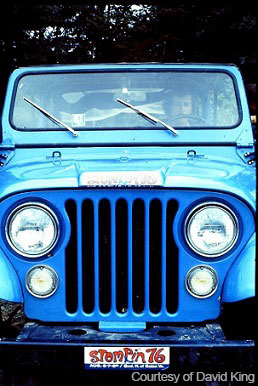 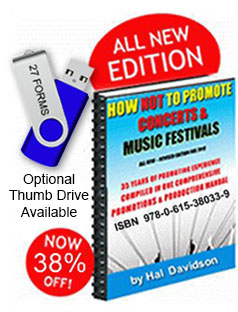